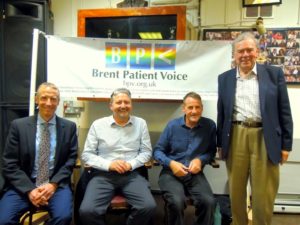 Dr Nigel Stephens, Deputy Chief Medical Officer and leading cardiologist, along with Simon Crawford, Deputy Chief Executive, met with members of Brent Patient Voice and other members of the public on 12th September to talk about the big challenges faced by our local hospitals.

Over 50 people attended the meeting at the Learie Constantine Centre in Dudden Hill Lane, NW10. They heard that what is officially called the London North West Healthcare NHS Trust (LNWHT) is responsible for four hospitals: Northwick Park, Central Middlesex, Ealing and St Mark’s, as well as 70 community clinical services. It is one of the largest Trusts in the country serving around 850,000 people mainly in Brent, Harrow and Ealing.

In the last year some 337,000 people went through one of the Trust’s A&Es or Urgent Care Centres. This is equivalent to the whole population of Brent or 1 in 3 of the population served by the Trust. While Trust staff have been rated “dedicated, caring and supportive” by the Government’s inspection body, the Care Quality Commission, Dr Stephens accepted that waiting times for serious cases in the Trust’s A&Es, especially Northwick Park, remained among the longest in England and that cancer patients were waiting on average more than the target 62 days for first treatment. Other important cancer targets were being met.

On the positive side the Trust’s stroke unit had won national commendation as the best in the country, undertaking pioneering treatment in some cases. Staff had been genuinely influenced by work done to articulate new values: honesty, equality, accountability, respect and teamwork, summed up as HEART.

The health chiefs said that the most important local challenges were keeping their financial “deficit” to no more than £49 million this year, recruitment and retention of staff and improving performance where it fell short, especially in A&E. Their plans for the winter included 30 new beds at Ealing and more work with others to ensure patients could return home quickly and make beds available for others.

A barrage of questions followed the presentations. One audience member, Tony Brewer from Ealing, asked “How does your intention to open new beds at Ealing fit in with the plan to reduce hospital beds by over 570 by 2021 across NW London and to end Ealing’s status as a normal acute hospital?” Responding Simon Crawford repeated the NHS assurance that hospital beds would not be closed until relevant community provision was in place. Robin Sharp, Brent Patient Voice chair, called for a resumption of public discussion about the future of Central Middlesex Hospital. Dr Stephens responded “There are wonderful facilities at Central Middlesex and we do need to make the best use of them we can.”

The meeting concluded with a call from Ealing GP Dr Paul Thomas for the National Health Service to become a National Health System with flexible working based on more local population units of around 50,000 people. “The present NHS has become too rigid and too complicated” he said.

Thanking the speakers for their high level and informative presentations and their frankness in responding to questions, Robin Sharp asked for patients’ appreciation to be conveyed to Trust and all other local NHS staff for the care they were giving in tough circumstances. He concluded “I hope that the Trust will continue and develop the involvement of patients in a genuine dialogue about future plans.”